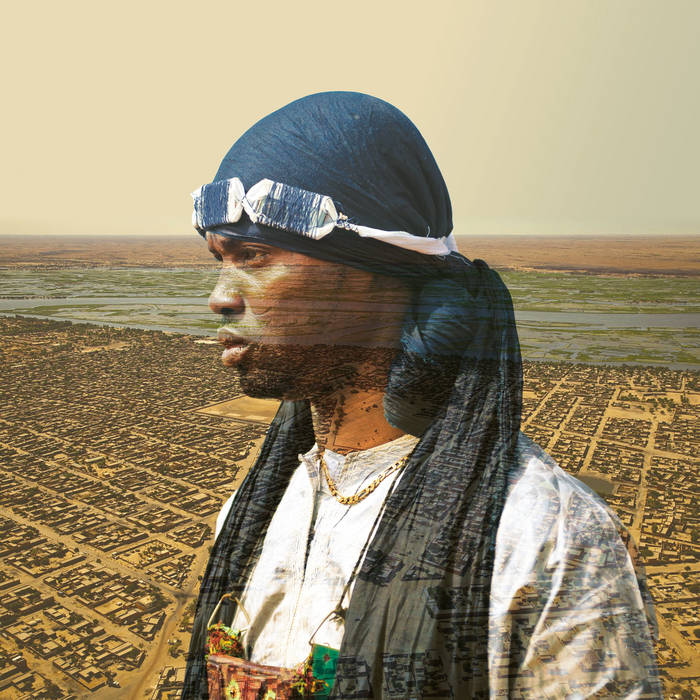 Blissed out electronic Hip Hop from the Sahara. Gao’s hyper localized genre reinterprets Western Hip Hop into a sounds unlike anything else in the world. Autotune, melodic synth, and PC-based beats combine in abstract home studio experiments. Droning takamba meets Hausa synth pop, with a healthy dose of Ragga. Obscure music that thrives on the local MP3 trade, this compilation highlights some of the most ambitious recordings of the past 10 years.

The city of Gao lies in the far Northeast of Mali, on the edge of the Sahara desert. It is the literal “end of the road”, the place where the pockmarked asphalt stops and takes a sharp 90 degree turn back to the South. It is a very old city. In the 15th century, Gao was the center of the Songhai Empire that went on the conquer vast swaths of West Africa. While long gone, variants of the Songhai language are found throughout the Sahel, remnants of the once mighty empire. Today’s Gao is quite different, a sleepy city of banco houses nestled on the bank of the slow moving river.
Musically, Gao is most famous for a distinctive rhythm known as Takamba, played on electrified traditional guitar, accompanied by calabash and a ghostly dance. Takamba has come to define the North, played throughout weddings and baptisms in both Songai and Tuareg celebrations. The North is also home to the guitar style laid out by Ali Farka Touré, with artists like Ibrahim Dicko, Baba Salah, and Sidi Touré all hailing from the Gao.

Musical traditions notwithstanding, the youth culture of Gao is dominated by a very different style. Known simply as “Gao Rap” or “Rap du Nord,” in the past 15 years it has emerged from the fringes as a proper genre in the repertoire of Malian music. Gao Rap is distinctive, immediately recognizable, and sounds like nothing else in the world. Inhabiting a juxtaposition of “digital low-fi,” contemporary beat making bares the unmistakable signature of PC software. The tracks are melodic, with notes plucked from default sample banks, mirroring vocals which are almost always autotuned excessively into inhuman territory.

As a modern genre, the origin of the sound is vast and complex, a meeting of a number of styles. Foremost, Gao Rap is proudly Songhai and is largely based on Northern music, borrowing time signatures from Takamba and collaborating with guitarists. But the genre is also influenced by geography. In a city where the internet has only recently arrived, music literally travels with people, digitized on mp3 and carried on cellphones. Gao is a stop on the transaharan highway with transient populations headed in both directions: immigrants bound for Libya and Europe, merchants headed into Algeria, and traders moving south from the Maghreb. To the southwest lies the Bambara speaking capital city of Bamako, with an international renowned music industry. Even closer is Hausa speaking Niger and Northern Nigeria and Kannywood, the Hausa film that churns out dozens of films a week, all with slick autotuned production and warbling synthesizers. Some of Gao’s Rap producers even cite Ethiopian music as an influence, albeit it thousands of kilometers away.

Gao’s Hip Hop scene began in the early 1990s. In lieu of instrumental backing tracks, the beat was played live on a calabash and recorded onto a boombox. The first studio album wasn’t released until 2001, a cassette titled “Mali, le Nord pleure” by the group “Faskaw’s.” Funded by international NGOs and recorded in Bamako, the album was too political for government censors and prohibited from broadcast on radio and national television - a contentious act that would be recognized in the North as Bamako’s oppression of Northern artists. Today’s rap music does not carry the same political message as originators Faskaw’s. “There are three subjects for rap in the Gao,” producer Annane Sy explains. “Music for dancing, love songs, and political songs about the development of the North. But really, most people don’t listen to the words.”

The biggest shift in Gao Rap was the introduction of the bedroom and home studio, allowing producers to create local language Hip Hop that could compete with the national and international imports. In 2000, musician and producer Oumar Konate opened the first studio in Gao, building tracks in Fruity Loops and a suite of other PC based music applications. This signature sound of Konate’s Fruity Loops style are still present in much of Gao Rap, particularly the melodic notes, dragged and dropped with the click of a mouse. Nearly all of today’s beatmakers learned from Konate and have opened their own studios.

In 2012, Gao was overrun by foreign extremists who imposed a ban on music, including the rappers of the North. Many artists were persecuted and studios were ransacked and destroyed. Many of the young rappers were attacked and beaten. Those that had the financial means fled to country’s capital of Bamako, while those without stayed behind, observing the new impositions while remaining silent and patient. Eventually, the invaders were chased out by Malian and French forces, and the political life of Gao has returned more or less to its former state. The youth who had left for Bamako have returned with more equipment. “Music has returned,” says producer Oumar Konate. “It has even exceeded what it was before.”

Today’s Gao Rap scene is prolific but small, with only a handful of studios producing all of the contemporary music. Rappers release their music on mp3 and trade their songs on cellphones. There are regular concerts in Gao and throughout the region, and the local radio hosts an emission dedicated to the genre. But Gao Rap is almost elusively confined to the North. While Bamako hosts a flourishing Hip Hop movement, with television broadcasts, lucrative sponsorship from cellphone carriers, and sold out stadium shows, Northern artists are excluded from the Bambara speaking Mali Rap world. As a minority ethnic group in one of the impoverished regions of the country, Gao Rap remains a distinctly local scene.