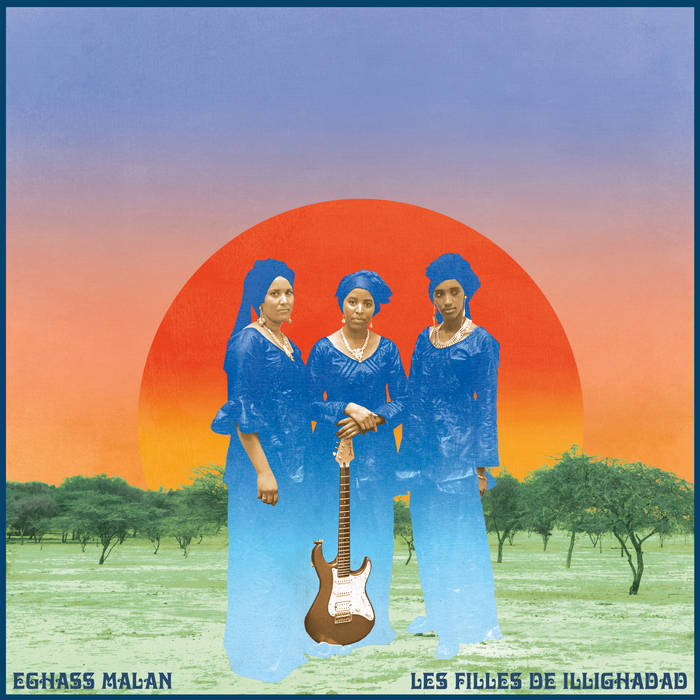 Les Filles de Illighadad present their first ever studio album “Eghass Malan.” The female-led avant-rock group hailing from the village of the same name bring their new genre of Tuareg guitar mixed with traditional rural folk. Versed in tradition, Fatou Seidi Ghali and her band have created contemporary studio versions that are unlike anything ever before recorded, transporting rural nomadic song into the 21st century.

Les Filles are all from Illighadad, a secluded commune in central Niger, far off in the scrubland deserts at the edge of the Sahara. The village is only accessible via a grueling drive through the open desert and there is little infrastructure, no electricity or running water. But what the nomadic zone lacks in material wealth it makes up for deep and strong identity and tradition. The surrounding countryside supports hundreds of pastoral families, living with and among their herds, as their families have done for centuries.

The sound that defines rural Niger is a music known as “tende.” It takes its name from a drum, built from a goat skin stretched across a mortar and pestle. Like the environs, tende music is a testament to wealth in simplicity, with sparse compositions built from a few elements, vocals, handclaps, and percussion. Songs speak of the village, of love, and of praise for ancestors. It is a music form dominated by women. Collective and communal, tende is tradition for all the young girls of the nomad camps, played during celebrations and to pass the time during the late nights of the rainy season.

In the past years, certain genres of Tuareg music have become popular in the West. International acts of “desert blues” like Tinariwen, Bombino, and Mdou Moctar have become synonymous with the name “Tuareg.” But guitar music is a recent creation. In the 1970s young Tuareg men living in exile in Libya and Algeria discovered the guitar. Lacking any female vocalists to perform tende, they began to play the guitar to mimic this sound, replacing water drums with plastic jerrycans and substituting a guitar drone for the vocal call and response. The exiled eventually traveled home and brought the guitar music with them. In time, this new guitar sound came to eclipse the tende, especially in the urban centers. If tende is a music that has always been sung by woman, the Tuareg guitar was its gendered counterpart, and Tuareg guitar music is a male-dominated scene.

Fatou Seidi Ghali, lead vocalist and performer of Les Filles is one of the only Tuareg female guitarists in Niger. Sneaking away with her older brother's guitar, she taught herself to play. While Fatou's role as the first female Tuareg guitarist is groundbreaking, it is just as interesting for her musical direction. In a place where gender norms have created two divergent musics, Fatou and Les Filles are reasserting the role of tende in Tuareg guitar. In lieu of the djembe or the drum kit, so popular in contemporary Tuareg rock bands, Les Filles de Illighadad incorporate the traditional drum and the pounding calabash, half buried in water. The forgotten inspiration of Tuareg guitar, they are reclaiming its importance in the genre and reclaiming the music of tende.

Recorded on their debut tour in Europe after just a handful of concerts, “Eghass Malan” maintains a feeling that is spontaneous and inspired. With minimal effects in an artist-led production, Les Filles stay true to their form and origin. Hypnotic guitar riffs, driving rhythm, and polyphonic resonant vocals combine to create an organic sound that is timeless and ancient, bridging ancient tradition and modern worlds. With songs of love, celebrating the village, and praise for the desert and its people, Les Filles create a repertoire of ancient songs, village tende favorites, and new classics. Les Filles de Illighadad breath new life into the genre, and "Eghass Malan” promises to shake up Tuareg guitar both at home and abroad.